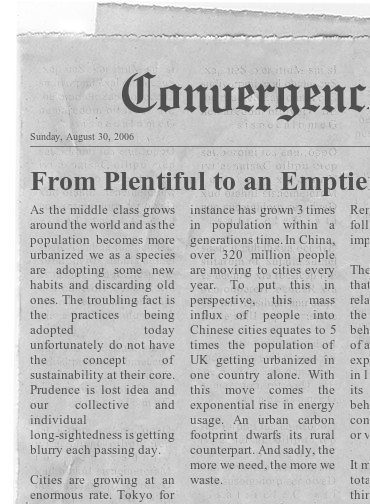 As the middle class grows around the world and as the population becomes more urbanized we as a species are adopting some new habits and discarding old ones. The troubling fact is the practices being adopted today unfortunately do not have the concept of sustainability at their core. Prudence is lost idea and our collective and individual long-sightedness is getting blurry each passing day.

Cities are growing at an enormous rate. Tokyo for instance has grown 3 times in population within a generation’s time. In China, over 32 million people are moving to cities every year. To put this in perspective, this mass influx of people into Chinese cities is nearly half the population of UK  getting urbanized in one country alone. With this move comes the exponential rise in energy usage.  An urban carbon footprint dwarfs its rural counterpart. And sadly, the more we need, the more we waste.

In this culture of consumerism, pedalled by giant conglomerates, we have become prisoners of our own devices both literally and metaphorically. One key skill that is deteriorating rapidly is our “Resourcefulness”. Resourcefulness can be described as the ability to utilize the available elements (objects, time and space) to their maximum potential. It is about making most of what is in our hand rather than longing for what’s currently out of reach.  Our environment is the biggest causality of the waning resourcefulness followed by our future generations.

“This is not working, must be a virus, I need a new laptop!”  This statement is a common place in the modern world. As customary it may sound, it highlights a symptom and therefore it is worthwhile to reflect and dissect this excuse further.

1) The user here has presumed that it has to be virus with seemingly little attention to detail.

2) It has been ascertained that the laptop must be replaced.

What is apparent here is the clear absence of the desire to “fix” things and the burning desire to do away with them. A rampant culture of disposability plays well for large corporations. Devices like phones that were designed to last decades are now the new FMCG.

A decade earlier, when laptops were dear, a user would be primed to run diagnostics and get to the bottom of the error. If it really had a virus, it would be removed simply by installing anti-virus software.  This trivial practice is unfortunately not prevalent anymore. The accessibility to new devices has fuelled our “can’t be bothered” attitude.

What is ironic is the Faustian bargain of trading resourcefulness for disposability is creeping into the lower strata of the society from the middle class.

In December 2014, the Conservative party peer Baroness Jenkins gave a statement that raised a few eyebrows “Poor people are going hungry because they can’t cook”. If looked from perspective of blaming the victim for the crime, the statement seems outrageous. And particularly when it comes out of a member of a rightist party, no more spice is needed to cook a scandal.

However, as outrageous as this statement sounds, there is an element of truth about it. The Baroness pointed out at the launch of a report into food poverty in UK  “We have lost a lot of our cooking skills, and poor people don’t know how to cook.  I had a large bowl of porridge today. It cost 4p. A large bowl of sugary cereal will cost 25p.”

Many Poor people (not homeless) who are reliant on food banks, cannot often cook even if they are given a bagful of groceries and required utensils. Skills for cooking simple wholesome meals like soups and broths are perishing. This is despite the fact that eating out costs a lot more and is unhealthier than cooking at home. Unfortunately, the baroness was made to apologize and needless to say no attention was paid on her advice.

With respect to the demographics, it may be expected that  older people are generally more resourceful. This is true for now but may not hold true for the near future. In today’s world, middle class parents who were raised on limited possessions are themselves pushing  their kids into a culture of disposability. This is because they are trying to over compensate their own sense of impoverishment.  If catering for every want (not need) becomes a crime, the prisons would not be able to cope.  Moreover, by removing every barrier, hurdle and challenge we are preparing minnows not leaders.

Lack of resourcefulness hits us in two ways. Firstly, it curbs our imagination and secondly it paralyses our ability to execute.

Our disconnect with nature, our sedentary lifestyles and our fading ideas of organic growth are all responsible for the demise of a skill-set that allowed us to survive from the times of the hunter-gatherer. It was our resourcefulness that allowed us to bond, to civilize and to thrive.  We need to reconnect and own up what we have and make the best of it. Else we well may drown in our un-inventive lifestyles.

A point worth noting is that the ambit of contentment in every religion is based on acquiring the self than what lies beyond.