This is in continuation to the previous article: Understanding ISIS

In order to eradicate the threat of ISIS, it is important to contain and quarantine it first, rather than going for an outright obliteration. As most nihilistic groups are self-effacing, once contained they will eventually decay out of existence. However if they are tempered with wrongly, the collateral damage can increase several folds. The world needs to be patient and has to learn from a historical context, how similar groups in the past were neutralized.

Fascist and Nihilistic groups have always existed in history and they are not limited to one culture or one religion. In fact, fascist ideologies of the recent past were  driven without any religious impetus . Even with a cursory glance on the Muslim history, one finds that such groups (with similar ideologue and methodology) have indeed existed in the past.

The historic khawarji movement or the Hashisheen movement lead by the Hasan- i-Sabbah both are comparable to ISIS. It took rulers decades to weed them out. They have always been a tiny minority and remained at the fringes of society rather than in the mainstream.  More recent example is that of Pakistan in 2008, when Swat valley suffered the menace of TTP rule. The world needs to take a page out of Swat valley cleanup operation when trying to devise a strategy against ISIS.

The following five steps have to be taken to contain ISIS.

It is now well deduced, that at the start of an armed conflict, the end might look to be insight, but it never is. Decades after operation Desert storm, the west still finds itself getting sucked in yet another operation in the same region. The use of force is never a panacea, although it may temporarily quell the opposition but it never eradicates it.

At present it might seem that reconnaissance followed by air strikes would finish off the 30,000 odd fighters of IS. However, any aware soul can work out how this story is going to pan out. Once the costly air strikes have finished with diminishing returns, a case will be made for boots on the ground. The problem is that these boots never really find firm footing but almost always find a quagmire. Gorilla urban warfare is almost impossible to win without sustaining heavy losses. Furthermore it is a protracted affair. By backing off from the lead role, the west will remove itself from being the naked antagonist in the eyes of potential recruits for IS.

A coalition of Muslim countries is exactly what is needed to bring their own houses and neighbourhood in order. Impeachment should start from within. It is no doubt that bulk of the fighters originate from immediate neighbouring countries. Once the coalition is made and objectives defined, the alliance should assign roles according to the expertise of each country. Turkey and Pakistan who have well trained and professional army should take the lead in military training and defence of borders.

Jamia Al Azhar of Eygpt, which is respected world over by all Muslims, must provide the moral guidance and religious impetus for this confrontation. Iran can seal it borders and play a passive role in logistics but should steer away from any involvement on the battlefront.  Iran’s front-line involvement can jeopardize this operation as it can potentially get labelled to Shia vs Sunni conflict, which would be playing in the hands ISIS.

There should be no doubt that the warped world view that ISIS has is very compelling particularly for the alienated, ostracized, disenfranchised, impoverished and unprivileged. Potential recruits may not be religious on the outset but a fascination to an alternate reality where they have position of authority propels them to join the ranks. It is no wonder that younger adults and teenagers are more likely to join hands with ISIS.

A counter narrative that is based on truth and the whole truth should be presented to counter IS ideology on the theological front. The power of media should be used to propagate the message. In countries where a trust deficit between the rulers and the populace exists, figures that are authoritative and trustworthy should take up the mantle to promote the counter perspective. In the end, the power of truth will serve as guidance for those who pay heed and will help in stemming the flow into the sorry escapism of the caliphate, that is ISIS.

It is equally important step in containing ISIS is making sure that they are not ambushed against a wall. A mechanism for safe passage should be established particularly for individuals who due to their vulnerability have fallen into the trap.  There are many who would like to defect but the uncertainty of the treatment on their return acts as a vice.

It should be made clear on the outset how every country would treat its returnees. They may be sent to rehabilitation centers to curb their extremist tendencies in future, but whatever the measure; it should be mentioned and withheld. A gung-ho approach of showing no mercy will prove to be counterproductive.

It is a general tendency to deal with the criminals and not the crime. Unless the root cause is addressed and eliminated, this problem is bound to arise again. The injustice in Palestine and other Muslim territories, the disparity in the world, the indifference of the world in resolving the Muslim issues, sectarianism within and the relentless globalization which cloaks the spread of modern western culture all constitute the grievance steeped in the Muslim world. These problems are complex and would take extreme efforts to even drum up a political will. However great the challenge, even if an ounce of sincere effort is noticed, it would go a long way in establishing trust among the grieved Muslims and the wider world.

The Swat operation was successful because the native population who initially hailed the TTP as messiahs, were given time, so that the true character of their captors  was found out by the very people who supported them.  It was only when the natives had tasted the wrath and menace of their captors and their feelings turned sour that the army moved in. The residents of Swat themselves became the eyes, ears and hands of the Pakistan Army. This lead to a more effective purge of the perpetrators. Similarly, the residents of areas that are under siege by IS should be seen as force multipliers and should be part and parcel of in any planned operation.

For further reading on Psychology of the ISIS, click here. 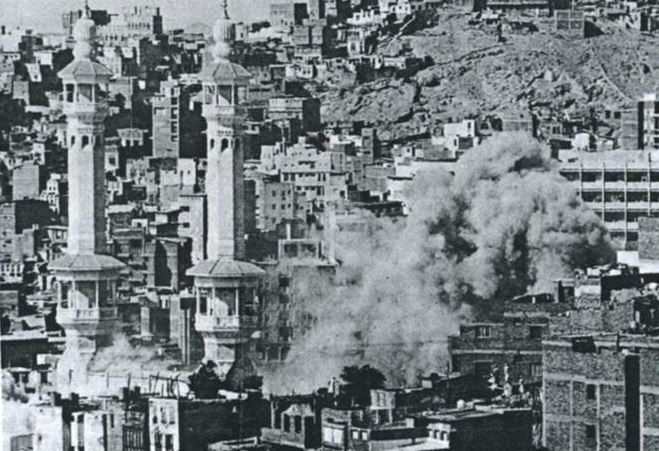 Siege of Mecca: The precursor to 911 and ISIS

Building the Counter Narrative against Wahabism