As the Wildling of the north i.e. Tehreek-e-Taliban Pakistan (TTP) wreak havoc with their focus now towards the south, it is getting irresistible to draw parallels between the popular HBO series and rising chaos in Pakistan. A game of thrones is indeed being played right under the nose of the current Pakistani government. A naive king at the helm “Nawaz Sharif” paints the perfect picture of Tommen Baratheon, both childish and shy of being in the lime-light. The juxtaposition of characters yields some remarkable results.  Lacking even an ounce of statesmanship the prime minister is more interested in gadgets and lavish banquets than taking notes of the unfolding events under his watch. Perhaps just like his on screen counterpart, he has left the state of affairs to his clan till he comes of age, if ever.  Which brings us to the question of person playing Tywin Lannister? The nominations are Chaudhry Nisar and Shahbaz Sharif, both feisty and fiery. Shahbaz however pips Nisar as he is the blood relative of the king.  I wouldn’t go as far as labelling Mariam Nawaz, Queen Cersei.

Similar to the wildlings, the TTP are nihilistic and the only thing standing between them and civilized world is the Night’s Watch. In our case it is the brave men of Pakistan Army. The army may not have “The wall” to keep the anarchic out but certainly have a resolve as high.  As the battles begin and the confrontation grows one can see the army taking hits from all sides. Let’s just hope the lines do not get thinner.

Going back to “GoT” series one, the story is set in motion with the murder of the “Hand of the King” Lord Jon Arryn at King’s Landing.  Dr. Imran Farooq’s murder in London similarly started off an equally intriguing chain of events. Intriguing, despite the bulk of the populace having a good measure of the hand behind it.

With his cheeky grin and connivance, I am sure everyone will agree there is no one worthy of claim to represent Lord Petyr Baelish than our very own Asif Zardari. In fact George R.R. Martin should take a leaf from Zardari’s manual to make Baelish’s character more colourful.

Competing for Lord Varys character are Maulana Fazl –ur Rehamn and Najam Sethi.  Both have supported the realm and will shift moral stance to protect the status quo. Lords Varys certain unmentionable disability tilts the scale in favour of Maulana but than again his being Master of whisperers favours Sethi. I will leave this one for the readers to decide. 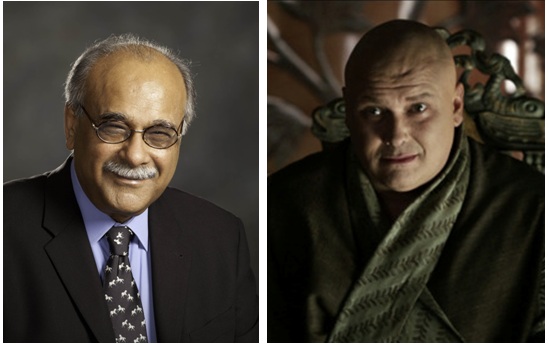 Tahir ul Qadri rightly cuts a figure of the pseudo leader Stannis Bratheon, although arguably Shiekh Rasheed is in contention for that title too. Both challenging the status quo, waging a confrontation and trying utmost to usurp the throne.  But standing in their way at the gates of Kings Landing  is Shere-Lahore, the Mountain, Gullu Butt.

Gullu “The Mountain” Butt: Smashing skulls for a hobby

Imran Khan’s PTI can be compared to the “House of Stark”. The only force that can be perhaps branded morally superior. Having been continuously wronged, the party of wounded was sent to the cleaners after the elections in 2013.  PTI had its red wedding through 35 puncture.

And finally somewhere far from the turmoil of Westorosian Pakistan, championing the rights of the financially enslaved, our very own Targaryan girl Fatima Bhutto is growing in stature abroad each passing day. She indeed is the rightful heir of the house of Bhutto. Let’s hope that she doesn’t need dragons and an army of unsullied to bring order out of chaos.

For someone who follows Pakistani politics, the thickening of the plot, the twists and turns, the webs of deceit are far more riveting than the fantasy series. Winter might be coming in Westoros, but the great game in Pakistan might see the climax during midsummer.

Readers are urged to let their imagination run wild and inform about other analogies that they find relevant. I will endeavor to add them and give due credit.

Is Bechdel Test the key to writing a blockbuster?

Pakistan Cricket: The fall from grace