Dogs, the mere thought of them makes many muslims wince, whimper, jolt and even shudder. What is about a dog that is so repugnant and fearful to almost a third of the global population?

Around 10 years ago while in UK, I came across a guide dog for the first time in my life. It was walking a blind man. Like an unfolding revelation, it stopped me cold in my tracks and made me marvel its ability. It was a moment of utter mesmerisation. When that dog came across a pedestrian crossing, with a swift movement it positioned itself in front of its owner  with such awareness and poise so as not to trip him. The blind person stopped and searched for the button to summon the green man on the signal. As soon as the signal called, the dog ushered him across the road. It kept walking till it came to a bus stop, where it halted its owner again. The bus came and it took him on board. All that while, I remained frozen in observation. It wasn’t that I didn’t have any experience of  a dog’s company, but the utility that I witnessed was inspiring and it completely transformed my attitude towards them.

I went back and searched on a documentary on guide dogs and was further amazed on how much independence (from other people) they are able to provide to those who are physically impaired. From morning till night, helping them out of bed, helping them getting dressed, taking them out,  administrating medication times and fetching things are just a few of the daily errands they run. And I haven’t even mentioned their contribution as pets. Since that day I made it a point to contribute to Guide dog charities.

And yet walking along with my colleagues and even members of my family, I see bizarre reactions when passing by a dog. They would freeze, they would jump on a ledge and climb a pole if they had too. They are completely overtaken by a phobia. This reaction for me understandable but is disrespectful.

Most of the dogs in the third world and muslim countries are stray.  During the night time when human movement subsides, they would roam freely and mark their territory. Come the following morning, the first people to enter their territory are in for a chase. This is where the fear of dogs stems from but to add to this there is also a prevalent perception of dogs being unclean (from Islamic point of view). 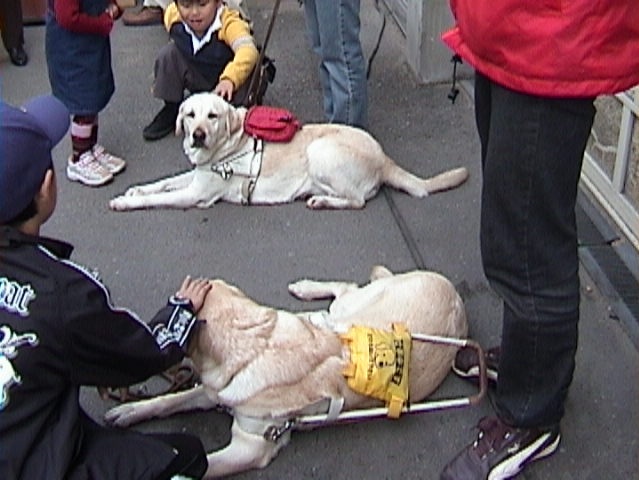 The Quran tells the story of the “seven” sleepers of the cave. While the Quran points to the fact that their number (of sleepers) is irrelevant, it always mentions the presence of dog with those pious men. It is for muslims to ponder that why would God almighty put an unclean “dog” in a confined space with those penitent men? And no, your state of ablution or purity remains intact if touched by a dog. So muslims need to revise their perceptions and change their behaviour.   It is the extreme reaction that shows a complete disregard of their service to humanity.

For thousands of years dogs have served humans as shepherds, as guards and even as hunting aid. They have rescued countless people in avalanches. Even in modern times they are used at the borders/ports for policing and for the war against drugs. If not in the field of duty they are testing out effects of smoke. There is a lot they have done for us and there is a lot they will do and can do. I hope we (muslim’s in particular), will learn to appreciate this beautiful creature and give credit for its services.

Let’s face it dogs can do without us but we certainly cannot do without them.

Role of a Modern Mosque

One of the best Quran Phone App

Differences between Deobandi, Barelvi and Ahle Hadeeth School of thought

Qurbani or Refugees: How to spend on Eid ul Adha 2015?